The Subtlety of September’s Entrance

They yet forage on the flowers before the porch

Under a sun shining on, strong as August.

Gather on the lines, unready to leave;

Unconcerned the village is deserted,

Windows shuttered underneath their eaves.

None have truck with the times men impose,

Their clocks and dates; assigning names

To days that are every one the same.

Their seasons do not turn on a tick

So they stay on, as we sadly turn away.

Yes, the kids, and I, are back to school, back to Pamplona after summer spent mostly in the village….

And the above is my lament.

But at least the swallows and house martins had a good year, after a slow start where I was worried we’d have a big decrease over last year. There were plenty of flies around this year, though, (really annoying ones!) after a very mild winter that didn’t seem to kill many flies at all.

A few hundred house martins and some swallows assembling on the lines above the village.

Planting for the next Century

Where Should I Plant this Sapling?

They say a man plants

A tree, not for himself, but

For his descendants. Well,

I agree, and have seen

The benefits of a mulberry

Planted by a man I never met,

More than a century past.

As the sentinel starts to sag

I’ve saved a sapling from

Between its roots and would

Take the next step for my

Generation before it falls.

But where would it prosper?

I fear the weather

Will not favour the same spot

As its forefather for much longer

Than half its lifetime,

And ere it gives fullest fruits

Will stand in different clime.

So, where should I plant this sapling

In a changing world?

Where its roots can anchor the eroding soil

As farmers harvest down to the last?

On a slope so the children of this village

Can reach the lower limbs

To stain fingers and lips on

Any remain after rains have

In a ditch to take some advantage

Of rich dampness as the rest

Of fields blister in the sun?

Or on a high knoll to stay dry

Turning this aridness instead wet?

It seems a bet to hedge;

I should plant a score

From hill to shore.

Rewilding my garden, as long as the rabbits eat the right plants….

So I have this garden in the country. It’s not quite mine, in that I don’t own the house, but it has befallen to me, more and more, to look after it.

It’s big. There are a dozen young trees, a long hedge, grape vines, shrubs, and there’s a lot of grassy area to mow.

I say grassy area because it’s far from being able to be called a lawn. More like a playground for moles.

But I don’t mind the moles. I prefer daisies and other wild flowers to grass in any case. It’s great to have moles, and it would be even better to see them once in a while.

Even better than moles, are rabbits. And we have them, too.

Unfortunately, in the case of the rabbits, I do have a problem at the moment.

I’ve planted a new hedge. It’s to hopefully block the wind that sweeps down from the pyrennes – the call it the Cierzo. When a wind has it’s own name, you know you’re up against it. Anyway, the new hedge, once established, will help, I hope. And it will cover the chain link fence that goes along the low back wall (put up to stop the cows coming in to graze the garden – picturesque till one of them breaks your windscreen while trying to swipe a horn at the herding dogs, and the farmer never owns up.) 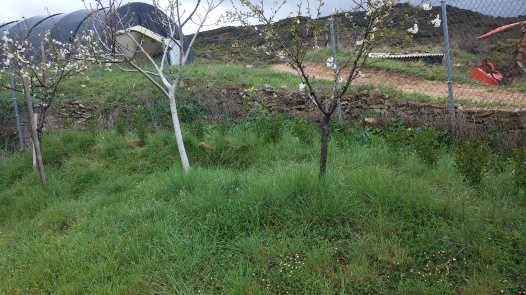 But to get established, the hedge has to not get eaten by rabbits.

And for some reason, the rabbits have decided it’s tastier than all the grass and dandelions and everything else growing right beside it.

the bottom half of the plant is nibbled to nothing…

So I had to take action.

Now, I didn’t stand watch with a shotgun at twilight. Even if I had time for that lark, I’d rather a rabbit in the garden than ten up the hill where I can’t see them from my bedroom window.

I haven’t seen the rabbit yet, but given the circumstances (plants nibbled at the bottom, a stone wall with a hole under one of the stones where a rabbit could get through the fence, and grass grazed on the other side) there’s no other culprit.

This photo is sideways, but you can see the easily accessed holes and the nibbled tuft of grass.

So I covered the damaged plants to let them recuperate, blocked the hole and hoped the little gits can’t get in any other way.

Eat your way through that, rabbit!

I feel bad, in a way, but there’s lots of other stuff to eat, and once the hedge is big enough, after this first summer, I’ll unblock the hole and let them nibble to their hearts content. After all, rewilding should always apply to our own gardens, and a few rabbits will mean I don’t get asked to strim the bank so often, making it win-win for everyone.

I’ve not posted any poems in a while, so I decided to add a page of Haikus to my website today. Hope one or two will please 🙂

The end of the summer

So August wasn’t so treacherous this year. I got the final edits and cover art for my second novel, Five Days on Ballyboy Beach ready for its release on the 19th, I did some more rewriting of a novella and had it accepted for publication in the new year with Tirgearr Publishing, and I wrote a short story based on my safari in South Africa last year, called At Last Light on the Sage Flats, which will be the title story to a collection of short stories I’m putting together for the end of this year. Oh, I finished that first draft of The Ecology of Lonesomeness, too.

I also started the sequel to Leaving the Pack – not quite sure of the title yet, but the working title is Leading the Pack.

And I am three-quarters way through reading The Count of Monte Cristo, which I have had on my shelf for about twelve years! I didn’t get around to season five of Breaking Bad yet, though – but the autumn is coming (feels like it even here, too – we didn’t have what you’d call a Spanish summer this year), so I’ll get to that, when I have a second draft done of Lonesomeness….

Meanwhile, here is one of the few poems I had a chance to finish, about doing very little….

Along the ridge a row of windmills go slowly round.

You can hear them when the wind turns south.

Similarly, we inhabitants stand around,

Eating from our gardens here, seasonally

Watching flight of swallows and their fellows,

Grass get cut instead of grazed and oak trees grow tall,

New abodes are built and others crumble to the ground,

Sitting upon a porch of an evening, the sky yet

As wonderful as youth, and starry as can still get,

Achieving only that act of getting old slowly.