A Poems about Farms and Wildlife

They don’t have to be mutually exclusive…. an orchard with flowers underfoot.

But sometimes farmers feel that they have to plough every patch their tractors fit into, for fear those flowers take energy away from the apples and nuts.

On a Sunday, the seventeenth, I went for a walk in the countryside about the village.

I walked along the hedges, trimmed now in March before the birds came come along and put a fly in a farmer’s plans.

I paused over an old walled water pond, for the vegetable plot, to perhaps look upon a frog, or salamander.

It was scrubbed clean. The concrete pale below the clear water reflecting the crystal blue.

Not a boatman stroked across the surface, ne’er a leaf lay upon the bottom to hide a frog or newt.

For what would a farmer do with silt? A streamlined machine these fields, these springs,

And cleanliness is next to godliness, of course. The wild world was sterilised of sprits in favour of clean sheets.

The dragons were already gone before Saint Patrick stepped upon a snake.

A day will come when none of us will see one, no matter where we seek.

Of course, the day seems to be coming faster than we feared, with the new  UN report about to come out today, Monday, declaring that a million species are about to go extinct if we don’t turn this shit, sorry ship, around toot sweet, as they say.

Which is terribly hard to tell your kids when they ask at the age of eight. 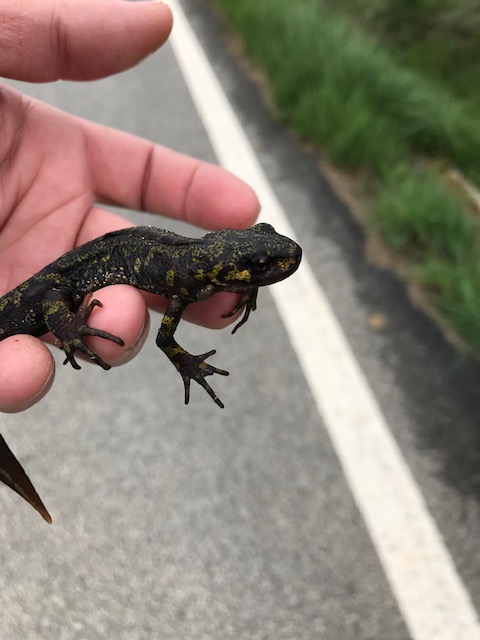 I didn’t take a photo of the empty pond, but I did help this lad across the road a few days later after some long-awaited rain.

I sit upon a hotel terrace,

Gazing out at grebes

Diving between white and yellow

This Dark Matter they say

Gives gravity to our galaxy

Must mingle with us here on Earth,

Else why do I feel such linking

With other species, the lake life teeming?

I am entwined with these trees

Reincarnation is reality. A part of me

Exists outside myself, with which I can commune;

Fragments of my former lives abound in this pond,

Fine portions of prior bodies populate the forest.

There’s a strand of me in that serene swan

These geese gliding in on the twilight and I

Still throb with the vitality of ancient seas;

Our electrons once spun in the same shells

And yet retain the memory of those orbits.

Since the energy of starbursts vibrates on in ourselves,

These connections are impossible to erase,

We are one: our earth, the stars and empty reaches,

Really only fractals of an elementary existence.

I wrote that a couple of months ago while staying in this hotel, having breakfast on this terrace. Just to show there are positive poems going round my head too! 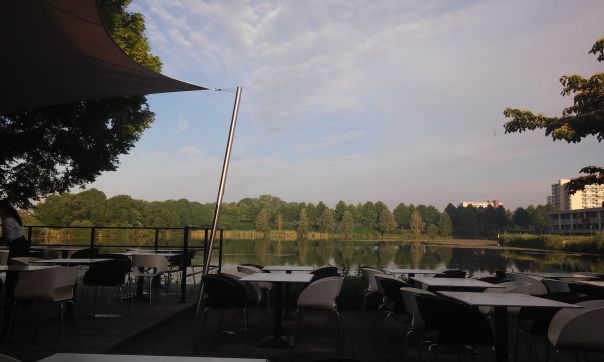 It was in the Netherlands, and the lake was man-made, created when dredging to make higher land elsewhere in town. The motorway went past behind those trees, but it was still wonderfully quiet and peaceful, and the waterfowl didn’t care how their home was made. It shows that nature can come back strong when given a chance, even in the midst of our habitations.

Here’s another in the same vein, one of a few I was inspired to write that week…

As you can see from the photo at the bottom, it’s hard not to be inspired in that light.

Twinned with an Egret

They say every electron has a twin;

In space and time, while even atoms

Exist in two separate places at once.

Well, that would explain this affinity

For egrets and owls and willow trees.

My twins vibrate in other entities.