I’ve favoured a return of our wild megafauna to our mountains for some time, now as a general wish to see wildlife flourish on our island. This includes letting the red deer extend their range beyond the small confines of Killarney NP, where it seems only those with friends in the right places and a pile of cash in their back pocket can get to hunt stags. It includes getting wild boar back, as far as our scant natural habitat is still suitable for them. And of course in includes letting the wolf roam the uplands, as those uplands regain their balance in terms of flora as well as fauna.

There are clear barriers to such steps. One of them is the lack of that suitable habitat, and another, connected to that, is the extent of sheep farming. 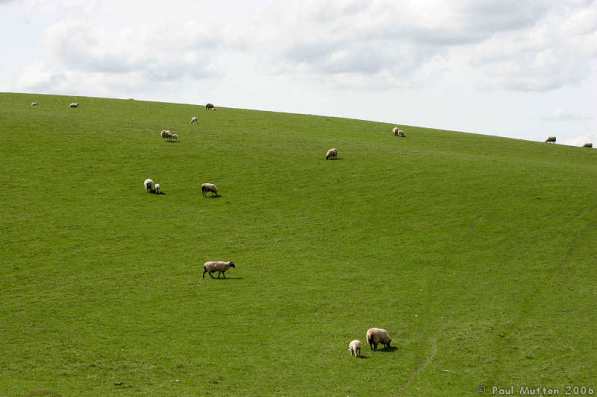 Sheep in a field. See any trees? Only habitat for tellytubbies.         Photo by Paul Mutton.

I have long marvelled at the fact that sheep are still farmed in Ireland. I’ve spent decades hearing about and seeing how destructive they are to the uplands – anyone whose seen the golf green fields where farmers have them on the lowlands can imagine their effect on a wild landscape. When I was still in college in the early 90s we learned about overgrazing at important conservation and recreation areas of Ireland (like the slopes of Errigal Mountain in Donegal, Connemara NP). Some call them woolly maggots, for obvious reasons.

Sheep in the mountains. Hard to spot a tree here, either.        Photo from http://snowdonia-active.com/news.

Simultaneously, I’ve spent decades pushing these animals ahead of me, both in cars on the roads and while trying to hunt or just hill walk without them scattering every shred of wildlife I might have otherwise had the chance to see. I even spent an hour saving one, which had got its leg caught in the wooden slats of a footbridge. It gave me scant thanks, and I was sure the farmer wouldn’t have been too pushed either way, given the huge numbers of dead animals you see while walking in our mountains. But I didn’t think letting it die of thirst was a valid option for anyone with a conscience. If my car jack wasn’t able to push up the slat, I was going to smash its skull in with a wrench, or a rock. A better end, despite the visual image you’re probably conjuring up right now…

Anyway, I remember a farmer telling me more than a decade ago that the wool was barely worth the effort to shear the sheep, and that the merchant only took it from him under no obligation to actually return money to the farmer. If it sold, he gave a portion of the sale, if not, then he… I’m not sure what he’d have done with the wool – throw it out, donate it, or what.

I’ve only eaten lamb a few times in Ireland, and I never liked it much. How much lamb is eaten round here and how much a lamb is worth, I’ve no idea, but I never imagined it was much (again, seeing how little attention is paid to them on the hill).

George Monbiot has the numbers. He reckons it’s less than 1% of the British diet, and the wool has almost no value. And it’s probable that the flooding caused by overgrazed hillsides means less food is grown downhill than otherwise would be, meaning sheep grazing actually reduces agricultural production.

He’s submitted a whole list of problems with the current Common Agricultural Policy and its effects on the environment.

One of these is that without subsidies sheep farming on uplands would be so clearly a waste of time that the sheep would disappear from the mountains by themselves.

And if that happened, well, two obvious effects would be that there would be no problem with sheep kills by reintroduced wolves up there (down the slopes any remaining sheep are easily protected in electrified pens at night), and the deer and other fauna would have something to eat and habitat to hide in as they spread over a landscape currently almost devoid of plant cover.

And real money could flow into these areas from people who want to see the wildlife, just like the reintroduced red kite (hopefully right now spreading across and out from Wicklow) brought £8 million in tourism revenue to parts of Scotland.

Seems simple maths to me.