Fireworks and the 4th of July.

I’m a big fan of fireworks. Perhaps because they are illegal in Ireland, and all we could get our hands on were small illegal boxes of bangers (firecrackers) make our own from two bolts, a nut and the scraped-off sulphur from a box of matches. A roman candle was a big fecking deal down at our bonfire on Halloween. (we will leave aside making cans of silicone spray explode here). 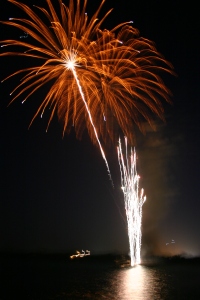 I’d never seen a firework display in real life until I went to America and was there for 4th of July. 20 years ago I was in Estes Park, Colorado, where my mates and I sat overlooking the lake. It was pretty damn cool.
But then I went to the San Fermin festival the first time, 2 years later. There I saw fireworks that put Estes Park in the ha’penny place – 8 nights in a row!

Ten years ago I was in Boston for the first time – watching down on the Mass Ave. bridge over the Charles River. We’d gone down after a barbecue in Brookline. It was impressive, but not quite up to the level of Pamplona. Definitely worth the walk and the watch for a fan like me, though.

Five years ago I was on a boat on a lake in Georgia (USA) and that was pretty nice, with a beer in hand and burgers in the belly. Four years ago I was in Maine, on a lake where the only fireworks were let off by locals on their docks and beaches. But my belly was full of lobster and it was an idyllic spot – peaceful and the lake like a mirror with the moon coming up – for watching even small fireworks.

This year I am having a similar experience to the folks back in Boston – pissing rain and stormy – this 4th of July. But even if the weather was perfect on the Charles, I’d prefer to be here in Pamplona for the 6th than there for the 4th – even if we are only talking about fireworks and not the rest of the festival.

My conclusion after all these years of 4th of Julys?

America does barbeque the best, but still has a ways to go in firework displays!

Oh, and Pamlona seriously needs to get itself a lake.

Maybe it could flood the citadel for the festivals….