The Letter or the Spirit of the Law?

Last month the Irish Minister for Heritage, Heather Humphries, decided change the law to extend the season during which burning and cutting hedges and other vegetation will be permitted, despite the protestations of thousands. 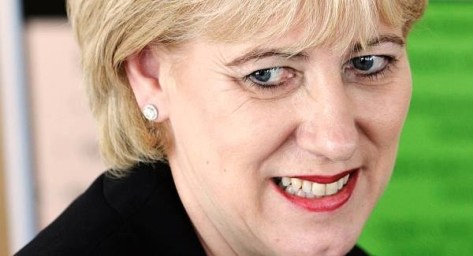 Heather Humphries. The fake smile is probably because she knows we know she’s not qualified for the job we are paying her for…

Before this, farmers could cut and burn during February, then they had to wait until September to any further work of that nature on their land. This was to protect the wildlife, especially nesting birds.

But this year they can wait until March before burning, or start in August again. Though considered unnecessary by and large, this has happened because some farmers were burning illegally last year – what more elegant solution than to make it legal do conduct such burning?

I watched some of the debate in the Seanad on this legislation. It was frustrating, as well as hilarious at times, as some politicians tried to claim the change was necessary because hedgerows were taking over our country roads and making them impossible to walk – I’d say the speed at which cars travel the roads nowadays might be more important. There are roads I’d never cycle, never mind walk, which I did twenty years ago.

This extension to destruction season comes just as climate change means some birds are breeding earlier nowadays. This year has been an exceptionally mild winter and spring will come soon, and even stopping in March will affect some birdlife.

But though the rules have changed on the insistence and lobbying of some farmers and landowners, it does not mean that fires have to rage this year like they did (illegally) last year.

If the weather is warmer (and perhaps dry – it could happen!) now, then farmers can get their burning done even earlier than they used to. They don’t have to wait until after March just because they can. There is certainly no need to wait to get the hedge cutting done – ti’s something that can be done very quickly nowadays with the machinery available. 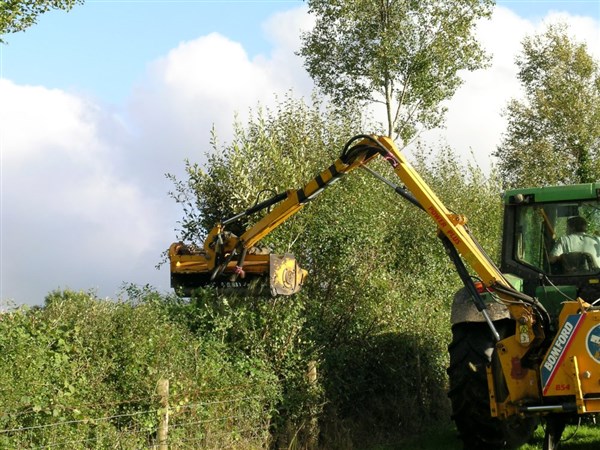 Hedgecutting in action. You don’t need months to get this done any more, but choose the wrong month and there will be a lot of bird nests getting cut in this particular hedge. Photo from http://www.dublinplanthire.ie

The farmers who care about the land (and there are a lot of them, despite how it sometimes seems) can keep obeying the spirit of the former law, rather than the letter of the new law. The law says we can drive at 100kmph in many places that we don’t even try reach that speed.

We can always do what we think is right, regardless of what the law says we can do. Plenty of anglers release their fish even when they can legally take them home. Some hunters let the fox slink away and just watch it, rather than take a shot, though they could legally shoot that fox, since it’s considered vermin (and would be asked to if the farmer was also watching).

If we are to rewild our lands and our lives, and indeed, keep alive the little bit of wildlife we have left out there, we have to rely on the good will, and good sense, of the majority in the face of the selfishness and, ultimately, as can see with climate change, idiocy of the minority.

In farming as in other matters we need people to do right because that’s the thing to do…. like avoiding paying taxes – if we all avoided paying our taxes like the elites do, every country would come to a halt.

And a majority of people wanted this legislation stopped. A majority of the senators I saw speaking were against it. But those in power pushed it through.

We can only hope that when they are gone from power, soon enough, this legislation can be reversed to rein in those few outliers who don’t give a monkeys about out, and their, environment.

Is it possible to bring back species where men are still farming?

Nature is, so far, waiting to return, as soon as we, humans get out of its way. In a damaged form in still exists even in Europe in between the farms and across their mosaic of monocultures. Recently, I read the good news that many species of large mammal have returned to the abandoned areas around Chernobyl that I’ve talked about before: https://davidjmobrien.wordpress.com/2014/03/25/chernobyl-and-rewilding-islands-2/

Meanwhile in Ireland, the hen harrier, a protected raptor has hardly been out of the news recently – and it’s nearly all bad news.

The first article I read suggested that farmers be given money to compensate them for protecting hen harriers in Special Protection Areas. This seemed ridiculous, if not abhorrent to me. After all, am I compensated for protecting schoolchildren from bullies? No, it’s part of me obeying the law like the rest of us have to obey the laws. This smacked of a blackmailing protection racket – pay us to protect the birds, or you might find the birds are dying out there.

When I read that a Scottish game keeper was found guilty of killing goshawks and other predators of gamebirds he was raising, I wonder why we, too, can’t simply protect our endangered and vulnerable species by enforcing the laws that are there to protect them, rather than paying protection money to those who would view them with a caustic eye.

However, it seems apparent that unfortunately, our little island, while too small, too built up and densely populated for wolves or other large animal to be released into, is indeed wild and deserted enough that wildlife crime is virtually impossible to prevent or prosecute.

The negative view of the hen harrier in Ireland just seemed to increase. Farmers and other unscrupulous landowners who see such birds as a barrier to them planting forestry or installing wind turbines simply make such barriers disappear. That’s if they are unlucky enough to have their land selected for protection because the species was still there when the sites were designated: just good habitat didn’t qualify, so those who’d killed off the birds in the first place were in a better position. And kill off the birds some did. Just a week later the headlines proclaimed that a much-studied and named hen harrier was shot. 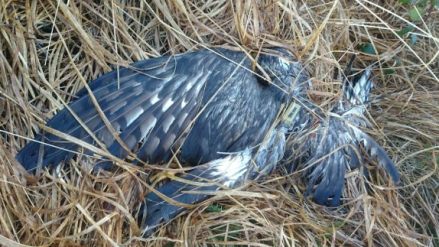 It seems that there is an impasse here. Ignorance and fear and lack of resources make it almost inevitable that our wild birds and mammals lose out on this island. From a Trinity College professor going on national radio and making a show of himself with inaccurate information about all sorts animals, including raptors, to the fact that the huge deer poaching problem is beyond the capability of the National Parks and Wildlife Service to handle, to the illogical farm supplement system, everything conspires against our wildlife.

Some farmers cling on to a way of life that perhaps has changed from an occupation to a pastime, in that there’s little money to be made from upland sheep farming, and they are only kept alive by subsidies. If these subsidies were used to make farmers wildlife guardians and protectors of habitats (though allowing scrub forest in my view is better than keeping prime hen harrier habitat, since it will eventually allow even more emblematic species to thrive) then we wouldn’t have these clashes. Turning from sheep to forests and wind turbines is a way to stay on the land, but if there were good sturdy populations of hen harriers, there would be less need to ban turbines on their habitat and we should be encouraging forests for wildlife as well as for timber.

Believing that you have to remove the wildlife to stay on the land because every little penny counts is sad, but could be alleviated by compensation where that wildlife does indeed financially impact the farm. Unfortunately, often such conflict is only in the human’s mind: foxes, though widespread, really inflict tiny amounts of damage on lamb numbers, white tailed eagles just aren’t a threat to them, and yet they get shot and poisoned because of this perception.

Finally, doing away with the local wildlife because it causes inconvenience and you don’t believe you should have to bother about preserving it (exemplified by the current movement to allow hedge cutting in summer) has to be something that people will reject because they are afraid of being caught and punished. Wildlife crime has to be considered just that. That will mean enforcing the law. At the moment, too many people think they can carry on doing what they want regardless of how the world around them has changed. I wrote about this before. Catching the culprits and making examples of them will not only give pause, but will eventually change mindsets. And if a farmer disagrees with the new kind of farming, then he should perhaps get out of the game. Most teachers who started working when you could smack a child kept teaching when corporal punishment was banned. Some kept hitting the kids now and then (I’m sure many had similar experiences to me), but eventually even they stopped or they left the profession. Now, the very idea of hitting a kid is equally abhorrent as that of poisoning a white-tailed-eagle that the government spent thousands of euros and man-hours reintroducing for the good of the country and its citizens. Or should be.