So I haven’t been all that unproductive, really. It’s taken many months to write – actually more than a year, which is pretty sad for a novella! – but I have completed a dystopian novella set in our future – sixty years down the line.

It’s something I think is appropriate to our own time – as in all the best dystopias! – so I have decided to self publish it, on Kindle Direct, and have it out there asap for  everyone living through this crisis – the pandemic: let’s take things one step at a time, but there are more crises to worry about later  (and that’s everyone on the planet, bar the bastard politicians and the rich who pull their strings) – can have a look and see how much worse things could get!

Seriously, it’s supposed to be funny, too. Things might not get that bad…

It’s on pre-order right now, for 99 cents! a steal. and it will come out on September 1st.

You can hit me up for a review copy if you can’t wait that long – but the review needs (please!) to be ready by publishing day so you can post it on Goodreads and Amazon and anywhere else you reckon the readers of the world will see it!

And since the novella talks about computer algorithms and whatnot – a small heads up: if everyone I know buys this book before Sept 1, then it will become an automatic best seller on Amazon. Seriously. It’s that simple to fool the computers. Then it gets on adverts from Amazon and more people see it and buy it. And then you get to say you know a best-selling author, instead of saying that one of your mates writes books, but you’ve never read any of them (yet).

Take a peak at the blurb here:

I’m sure some of you have made resolutions. Many of you might have decided that it’s pointless. But for anyone wondering what you could do to improve your life, just decide to get out of the city more often – once a week if you can. I guarantee you’ll feel great! 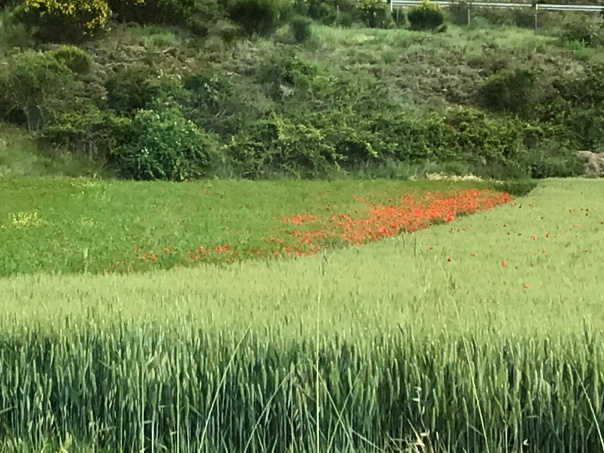 Walk on the poppy side of the line, of course!

Zipping round town, ticking off lists, picking up kids,

Rather than revelling in the darkness inside or out.

Yet, rising in the wee hours, Saturday, in the woods

Energetic Monday morning than the longest lie in let.

Last week in Asturias, a northern province of Spain where wolves are protected, a group of twenty were prosecuted for fraud. They’d shared a booty of up to two hundred thousand Euros between them.

They had been faking wolf attacks on their livestock and claiming the compensation which the government gives to replace the sheep and cows that any wolf might have killed.

The group was made up of nine farmers and eleven forest guards they were in cahoots with They couldn’t have gotten away with it for so long if not for the forest guards who claimed these were indeed real attacks. Any forest guard who was not getting part of the money would have seen straight away they were fake.

This accounts for a full fifth of the one million euros that Asturias pays annually in compensation.

In 2014, several farmers were caught getting paid double for their losses – claiming insurance for the loss of livestock as well as the compensation for wolf attacks.

But apart from the monetary damage they’ve done, stealing from the public purse, they’ve contributed to the vilification of the endangered predator, making it seem more dangerous to farming than it really is, and pushing public opinion against it’s continued protection and spread into former territories from which it was eradicated in the last century.

In the last few months several wolves have been killed illegally and their heads hung in various places.

Wolf head hung at a crossroads in Asturias – image from El Pais newspaper article linked below.

The Spanish Civil Guard police think so – they say the animal has been criminalised and this fraud has led to an atmosphere of rejection of the animal.

The statistics of wolf attacks were skewed for years. The numbers of wolf-kills farmers claimed was considered “inexplicable from a biological, physical and mechanical point of view.” Once the numbers of claims were presented in a report (65 paid out in one year on one farm alone, for example) the year later there were drastically fewer claims.

Farmers in areas of wolf recolonisation (for example those south of the River Duero) have resisted the recolonisation of the predator on the basis of false data. In fact, the wolf kills very few livestock and there is less to fear in terms of possible losses than the numbers indicate.

Not only that, it leads us to ask the question, how many more farmers might be trying to fleece the system? How many other attacks have been real? How many fake?

The compensation payments are a useful step towards trying to bridge the gap between farmers and ecologists, two groups who don’t usually see eye to eye in Spain (the farmers often claim that the activists – there’s a difference between ecologos, the scientists, and ecologistas, the activists, in Spanish – have no idea how the countryside actually works when they come up with their plans and laws).

Forest guards claim that farmers pressure them, and even threaten them to get them to sign a death by natural causes, or lightning strike, as caused by wolf attack, and many have been sued. Farmers buy cheap horses and leave them alone on the mountain so they’ll be attacked by wolves, since the compensation is more than the horse was worth.

No ecologist claims wolf reintroduction, or protection, is, or will be, completely conflict free. Yet if the farmers pretend that there are more problems than there really are, what are we to do?

One wonders how many wolf attacks would be reported if there were no compensation at all, if it were just a data-collection exercise. If such fraud is found to be more widespread, there might be some calls to find out.

After all, science cannot be carried out on the basis of economic fraud. We need to know the real figures. Otherwise how are we to guide the reintroduction efforts in other countries?

A post I had on my former google site… I wanted to repost and the recent (ongoing) floods across the British Isles made George Monbiot’s recent posting about denuded hilltops due to sheep grazing practices reminded me of this connection between a post of his and a Poem I wrote years back.

The Secret of the Thorn Trees

Why do the hawthorn and sloes carry such barbs

Across an Irish hedgerow, as if they were scrub

Bushes upon the dry savannah? Against caterpillars,

Or our diminutive deer and domestic livestock?

Or do they betray the absence from our landscape

Of what belong: buffalo, megaloceros andmastodon?

A poem I wrote in May of 2010, when observing some thorn trees in a park in Boston along the orange-line train tracks near Green Street.

I was reminded of it just this last week when I was reading through some blogs by George Monibot, a writer I have huge respect for:

He explains that our hedgerow and woodland trees are designed for the megafauna that he’d like to see return to Western Europe and the British Isles, rather than the roe and other deer species we have.

I can only concur with George  (I’d never claim to have had the idea first!)