The Fear of Fewer Humans

I listened to a radio show talking about a book just out, called Empty Planet.

Yes, it was about the potential problems of the shrinking population it predicts will happen before the end of the century.

I listened to it, and there was some pushback from a UN demographer saying that it wasn’t going to contract so quickly, and in fact a ballooning population would occur first.

But even if it does happen, if we don’t go to 11 billion – I can’t believe that we are even saying that when we have so many problems already with 7.

There are several pundits worried about population shrinking as a disaster. They use the words dire, crisis, timebomb, drastic effects.

People talk about population reduction as if we are going to suddenly disappear from the face of the planet.

The world wasn’t empty when there were a billion humans. There were enough for a fucking world war or two. The worst flu epidemic in history killed tens of millions and the world kept going on, with hardly a blip on our population.

The world wasn’t empty in the nineteenth century and we were inventing cars and telephones and all that stuff.

Some of the drastic effects outlined here are about one country losing population while others don’t – a kind of population arms race fear in my opinion.

Our cultures will survive.

No country needs multiple millions of citizens to keep its culture alive. Look at Ireland. It lost half its population in a few decades and still we know what it is to be Irish. There are fewer Irish per square km of Ireland than there are of Spaniards to square Km of Spain, or any other country practically in Europe – 4 million compared to 16 in the same area of the Netherlands.

And within that relatively small population, let’s be honest, how many people do Irish dancing, play the bodhrán or uilleannpipes, or even speak the language very well? (Hint, I do none of these things.)

In our globalised (mostly Americanised) world, most of us watch Netflix, shop in Zara and dance to techno., not to mention eat pizza and curries.

It only takes a handful to keep a culture alive.

Many Native American’s have kept their language and customs going despite being nearly wiped out by European invaders.

The highlanders of Scotland kept their Gaelic, kilts and tartan going, despite the crackdown on them in the 1700s.

The Basques were prohibited from speaking, too, yet now my kids speak only Basque in school, and they learn the culture of many villages and towns in the region – carnival means making a different costume every year in my house!

People tend to think that the way the world was when they were young is the way it should be.

That’s why some of us don’t notice that the insects are vanishing, that the seas are empty, that sheep are not supposed to be eating every tree seedling that tries to sprout.

We are used to having billions of people, used to hearing that there are more than a billion people in both China and India.

But it doesn’t have to be that way.

A billion human beings is quite enough for Planet Earth..

If we want those folks to live in any way approaching the wonderful lives we are (could be if we tried) living in the western world, then we would be better off with even fewer.

A planet emptier of humans would be able to become one full with the other denizens of our ecosystems we have pushed out during our population explosion. 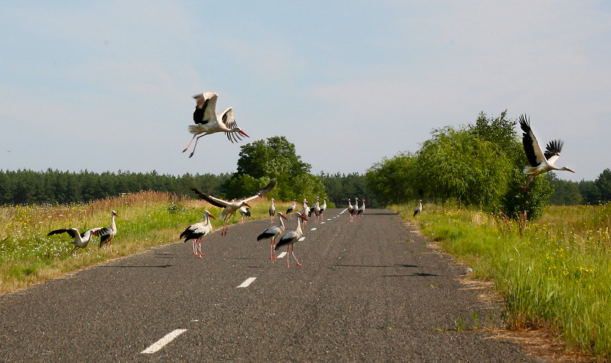 I’d rather meet some storks while cycling along a country road than a load of cars and trucks. Or other cyclists!

And, for those who only care about seeing the same species, perhaps this lower density will help us appreciate the other humans around us

For our fellow citizens have become mostly background noise to us: moving furniture and to our lives.

We sit on metros and busses surrounded by others without even catching their eye. We go to coffee shops and bars and exchange few words. The supermarket customer now hardly needs to acknowledge the existence of the cashier, if there is one. Our elevator journeys are a gauntlet of greetings, goodbyes and trying not to look at one another in between.

If we were less tightly packed, perhaps we could become more personable (note the word) and talk to one another, chat with our neighbours, smile on the street as we pass, like people did in the past when they lived in villages, like they still do in small communities.

Remember when we all laughed watching Crocodile Dundee deciding New York must be the friendliest place on Earth, with seven million people all wanting to live together?

I see only advantages in such reductions. The only problem is how to get there – and it’ll be most probably abruptly by climate devastation and the loss of biodiversity.

Malthus always gets a bad rap, but as Naomi Klein said, Climate Change changes everything.