September again; it comes so quick, as a good song says… 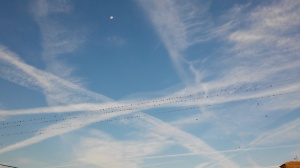 The housemartins are ready for the new season (the swallows use another set of wires). 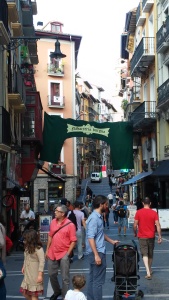 The city of Pamplona used to be divided into three Burgos. This is mine.
The celebration of the privilge of the union of these three (592 years ago) takes place on the 8th of Sept. Small San Fermin, or San Fermin txikito takes place at the end of September.

For me, September started with dental surgery, but I’ll save you the photos of that…

Anyway, ’twas a good summer.
Apart from sitting on the beach and visiting home, I watched three seasons of Mad Men, read half of MR James’s Ghost stories, and all of Lonesome Dove, wrote a novella, and almost all of a novel (still not ready for submission, albeit) I put on a few kilos, saw several species of raptors every day and a few foxes and roe deer around, but got few decent photos, made a saw horse (as well as cut and constructed a few walls of logs) and mounted a headboard in the village house.

What I haven’t done is write many blog posts, but I hope to rectify that this autumn..

I did scribbled a few more poems, one about mountain biking, which I didn’t do enough of this year, really – sticking to my desk instead.
Here are a few more of these…. two are inspired by having a child ask the questions we never got good answers to in our day… at least I didn’t.

Old friends we seldom saw
Except in photos or in a bar,
But who shared a hobby, such as
Biking or hiking, where we are alone,
Never enter our thoughts upon the
Mountain; only when we return to recount.

However, now they are gone from those
Groups in the bar relating their days in
The saddle, their face comes to mind any time
We sit upon a mountain bike, it seems,
Every crazy climb and mental descent,
Every path picked over rocks and
Gravel track or long asphalt road
Through fields and forests
Is hallowed ground.

They told me dogs don’t go to Heaven.

If so, then much less the wolf,
Nor would the fleet deer flee.
If there are no dogs allowed,
Then neither birds nor bumblebees
Enter, I’m sure. Who visits flowers, then?
None need, for they are also absent.
Mountains there are equally bare
Of the forest that covers the one before me.
When they tell me of Heaven, I can hardly
Imagine how the water flows and falls there,
Or why one would swim in the wide blue sea
Without a fish to see.
They tell me
Dogs don’t go to heaven, so I’ve decided
That’s not somewhere I’d for ever want to be.

Thoughts on Obvious Questions Reappearing as a Parent

Why did Cinderella have to go home by midnight anyway?
What kind of fairy godmother gives a taste only to take away?
Was it because young ladies do not linger out all night?
Yet for the rest the party was in full swing when she took flight.

Control and strict rule sets of the time seems to be at base,
For readers to learn early how a suitor should give chase
And girls be given freedom only in small doses, lest
They reject the men who’d take them and clutch it to their chest.

The Poplars and the Church Tower

The church tower of Olleta has stood five centuries
In the fork between the river and the gulley;
The row of poplar trees four fewer, but for forty
Years now have stood a few feet taller; a monument
Of Nature making the village square shadier.

But they won’t stand longer,
For they’re coming down this week;
Some to make room for renovations to the church wall,
Lest it fall in ruins – after all, ’twasn’t built to last this long –
And the rest to return the view
Of the sun-drenched sandstone
From before it was shielded by such tall trees;
Proving man prefers to gaze upon
The wonder of his own creation.