There are sheep in them there hills. But finding them isn’t easy.

Last weekend I went for a walk from our village in Navarra to try to see the mouflon which had been illegally introduced to the area last year. The numbers had increased to the point where the local police were brought in to try to remove them by baiting them with salt licks to a field where they could shoot them. I’d heard that several of them had been shot already, and I went to see if I could spot some of them. I’d never seen this species outside of a zoo enclosure and I was lucky to catch a quick glimpse of two.

Yesterday in the local newspaper an article said that the local hunters have been authorised to shoot as many mouflon as they can while they are engaged in their normal boar hunting activities. I had seen this coming. This was probably what the local hunters were waiting for, and whoever released the animals had had just this idea in mind. Whether all of the animals in the area will be shot is up for a debate, and in my opinion it is hard to see how all of them will be killed, given the manpower needed to eliminate them. Yesterday three groups of boar hunters came, and shots were fired, but we’ve heard nothing about any mouflon having been hunted. More likely they dispersed the animals more. There are many who think that only males will be shot, anyway, because what hunter wants to shoot a pregnant female of a novel species right at the end of the season when you could shoot two next autumn? 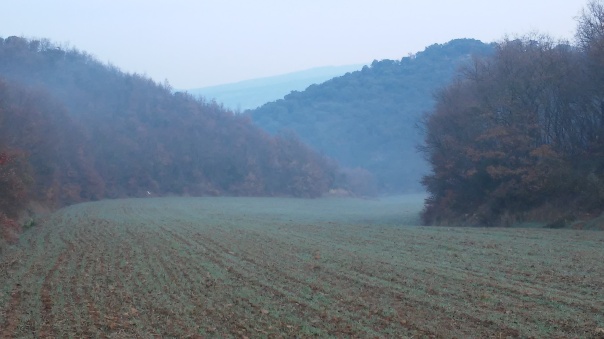 The field where I saw the mouflon – beside the bank of pale grass at the end.

My question is, however, whether shooting them out is, or is not, a good idea. I’m not sure where I should come down on either side of the argument. As an ecologist, I am aware that introduced species can wreak havoc upon ecosystem, and she sheep can be particularly destructive. On the other hand, there is the fact that rewilding landscapes doesn’t necessarily mean that only animals which were there before in historical times have to be reintroduced and no other species can be.

If these were muntjack, then I’d say get in and get them out. ASAP, using all the manpower you can muster. Muntjack can wreak havoc on the plants. Introducing them to Ireland, which some it seems have tried and been somewhat successful at in recent years, is a stupid idea.

The article does not mention that of these animals might be detrimental to the local flora of the region. Instead, it says they might compete with native animals, such as the wild boar and the roe deer.

The article says that these sheep are very adaptable to various ecosystems in Spain where they have been released. I haven’t heard any horror stories from these other places yet.

Though officially from the Mediterranean islands of Cyprus, Corsica and Sardinia it seems that the mouflon, or a very similar species, must have been native to the mainland of Europe at some stage. They didn’t just pop up and three islands from nowhere. Given their adaptability it seems like to me that they were probably fairly widespread until humans decided they were competition for their own descendants the sheep, in the same way the aurochs were competition for their descendants, cattle.

If wild sheep were here before and they are returned in a small population I’m not sure what difficulties if any, ecologically speaking, may arise. After all, these mountains I’m looking on right now used to be grazed by thousands of sheep and goats., and the landscape suffered much from it from what I’m told by the old timers, with the understory of the forests bare from intense grazing of the sheep and goats of the local farmers.

Shepherding is not so widespread here anymore, but still hundreds are brought around some of the area. The forests have thickened up, though, and I have heard that the local government want to pay shepherds to bring their goats into their forests to help “clean them up” and tidy them because there forests are quite dense with shrubs and thorn bushes. Seems to me that these mouflon might do such a job for free.

On the other hand, I’m not sure if the population of roe deer and boar will be badly affected by these other ruminants sharing the mountains. After all, the population of both the roe deer and wild boar have been increasing in recent years to the extent that they are causing problems with road traffic accidents and farmers are complaining of destruction of their crops. I see tracks and animals all the time. In fact, blind eye is being turned to the poaching of these animals so their numbers can be reduced. Therefore, if the plan were to compete against the roe and boar, it would be a plus in that respect. I can’t see what objection the farmers could have, unless the mouflon are doing more damage to their crops than the roe deer, and boar. That I don’t know, and from my point of view as an ecologist, I don’t have very strong opinion either way.

I heard that the local government is mostly worried that they’ll have to foot the bill for any diseases the farmed sheep might contract from their wild cousins.

However, in terms of the wildlife, the flora and the other large animals, even the rabbits, I don’t see how a small population would have so great an effect.

It’s not as if mouflon don’t coexist with other ungulates in their “natural” environment. There are wild boar and red deer on both Corsica, and Sardinia, and Fallow deer and wild horses on Sardinia too. Cyrpus is a bit smaller, but wild goats share the island with the mouflon. How can the mouflon be so detrimental if they’d not ousted these other from their islands?  Roe are slightly different, but both roe and red deer share the Scottish Highlands with plenty of sheep.

From my walk in the area, there are boar and mouflon sharing the same field.

Boar tracks, on the left, with some soil pushed about with the nose, and mouflon tracks on the right, in the same field of young wheat.

Perhaps they can even help diversify the fauna of Navarra and other parts of mainland Spain, the way the bovines and equines do (a big part of the rewildling movement) Here in Navarra, and in this valley, cattle are led into the woods daily and some are left there for months on end, as are horses, without any concern for the other fauna. That’s because they’d not detrimental; quite the opposite. There are even moves to reintroduce bison into Navarra to help improve ecosystems.

I know the animals were not introduced with the intention of making the land better, but if they can be kept at small numbers, in low population densities it might be for the better.

But I’m open to a more knowledgeable opinion.

Let me know what you think in the comments.