← Easter Island: What if they saw it coming?
Deer “Management” in Ireland: wolves would do it better… →

Spring has sprung… or has it started?

While Spring officially started at the beginning of the month back home in Ireland, in Spain we are still in the middle of winter, with the next season only set to start in another month on the 21st of March. 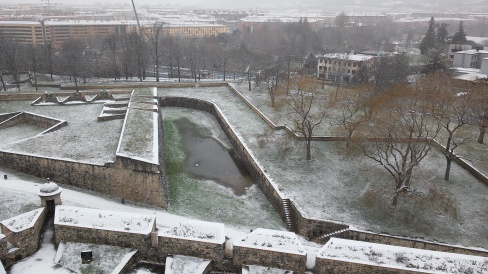 the walls of Pamplona dusted with snow

It is, I admit, the height of skiing season, but even here, the daffodils are shooting up and will soon burst buds, the crocuses in the parks are spotting the grass, and I even saw a few daisy and dandelions the other day. The trees are mostly still bare, but showers of catkins have popped out on a few.

my daughter gathering snow for a snowball fight before it melts

Mostly, though, you can just smell it. The air is different. Despite the snow that we had last week, there’s a feeling of spring that even humans living in a city still experience.

Spring is here, as far as I am concerned.

And summer isn’t far behind. For I saw the bats take their first flight of the year and it reminded me of a poem I wrote last year on the subject of signs of summer, more than spring. It’s perhaps a little premature to be thinking about butterflies and bees, but since I haven’t posted a poem in a while, here it is.

There are many signs of summer coming, here,

And the return of the swifts, or

The first flight of the bats at twilight,

The scent of honeysuckle through open balconies and

The abundance of butterflies on the garden lavender,

Some are specific to Spain, like closing the blinds

Against sunlight to keep the house cool, and

Sleeping with the windows open all night

Pouring water to fill the swimming pool and others

Seen only in this city: setting up the tombola,

Putting the fences around the flowers in the park

In preparation for the festivals and digging up

The road to get it ready for the running of the bulls,

And lastly, putting up with the stench of piss

Upon opening up the street door every morning.

← Easter Island: What if they saw it coming?
Deer “Management” in Ireland: wolves would do it better… →