Today I have the pleasure of introducing a new Author at Tirgearr Publishing, Jaz Hartfield, who’s got his first novella out now.

Take it away, Jaz!

I had an idea based on hen and stag parties in Amsterdam. I’ve been on such weekends and I know the mayhem that can be caused on such trips. The red-light district in Amsterdam is a complete free-for-all. You name it and it’s probably on show or in a shop window somewhere. The Banana Bar and the Sex Museum, plus other places mentioned in the book are all real. I remember enjoying the crazy lads’ weekend – getting drunk, watching dodgy shows and so on (I’ll leave the rest to your imaginations). But by the end I just wanted to go home and do normal things like washing up and drink a hot cup of tea! See, I know how to party.

I began to wonder if romance could occur in such a place of debauchery, and that is the beginning of ‘One Night in Amsterdam’. In terms of romance, the book also questions where love and sex overlap. Where does love begin and lust end ? It’s an age old question, but here is a modern version of that narrative.

I wrote the novel, putting in what I thought was lots of hot and explicit sex, only to be told by my editor that it needed much more! So here it is. Will you be brave enough to spend ‘One Night in Amsterdam’? 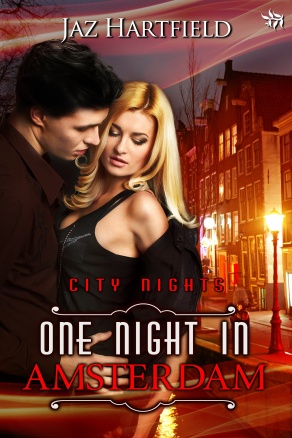 Blurb for ‘One Night in Amsterdam’:

Chloe organizes Jo’s hen weekend in Amsterdam, glad to get away from the usual boring or married men that she sleeps with. Perhaps she’ll meet some cool guys up for a bit of fun. If not, at least she’ll make sure her best friend gets very drunk while they all party in style.
Dean is getting married to Tamsin, but having serious doubts. His mates take him to Amsterdam for one last weekend of debauchery before settling down for the rest of his life. But is Tamsin the right woman for him?
When Chloe and Dean meet in Amsterdam’s red-light district, they are immediately attracted to each other. Dean tries to justify one last fling before marrying Tamsin. Chloe feels bad about having sex with someone else’s intended. Yet, a night of amazing sex is exactly what both of them want. So, why shouldn’t they just enjoy one night of fantastic, guilt-free sex?

Extract from ‘One Night in Amsterdam’:

Stepping forward with a sigh, Chloe pulled her pink sweatshirt up to her neck, pushed her fingertips under the wire of her bra and tugged upwards. Her boobs fell free and bounced in the cool air.

A huge cheer erupted. That was when she saw all the mobile phones pointing in her direction, and she wondered which dodgy sites she’d be starring on tomorrow. She could only hope her family, friends and colleagues didn’t subscribe to them.

Lars put his hand down his trousers and stepped closer to her, his tongue now waggling lasciviously, and closing in on her right nipple. Chloe deftly replaced her bra and sweatshirt just in time.

“I’m not a bloody prostitute, you perv. Don’t touch me unless you want your gonads shoved up your throat.”

Lars stepped back and removed his hand from his trousers. The crowd around began to disperse.

“Didn’t we say forty?” Lars replied, holding out his hand – the same one he’d just taken out of his underpants.

They all looked at her. She took out her purse and pressed her last three ten Euro notes into his hand. “You should be paying me after what I did.”

To her horror, he took her hand and thrust his card into it. “I would like to fuck you. Call me.”

“Piss off, creep.” Chloe handed it straight to Di, whose face lit up. Lars scowled but immediately shrugged it off.

He led them a hundred metres or so up the street until they reached another brightly lit building, this time with a giant pink elephant in lights on the facade. Underneath it said ‘Theatre Casa Rosso’ in red neon lettering. Lars muttered something to the bouncer who nodded and beckoned them in.

“Tequila slammers all round. Get ‘em in Chloe.” Di pulled a face at Chloe, who tutted and nodded. She got out her credit card.

“Take your seats ladies. We bring drinks to you.” He took the credit card. “I keep tab open for you.”

“Thanks Chloe. You’re the best,” Jo said, stroking her arm.

They went through into the auditorium and found seats in the second to last row. It looked like any civic theatre with stalls and a circle. The only real difference was that on stage a longhaired man was thrusting doggy style behind a blonde woman on all fours.

Chloe nearly dropped her drink. The couple looked bored as they spun slowly round on a turntable, so the audience could view the spectacle from different angles. The naked couple kept changing positions, displaying mindboggling gymnastic agility. He had an enormous dick with a cock-ring glinting on it. She seemed to like him entering her from behind and orally. They just kept changing from one position to another, him thrusting endlessly and never appearing to ever climax. The five girls giggled and nudged each other.

“How does he keep going like that?” Di spluttered. “Most blokes I’ve been with only last two minutes, max. Now he’s a real man.”